First a confession, I didn't actually meet Noel Gallagher. The truth is I was in the Warwick Castle pub in London's Little Venice and whilst heading to the gents walked past him as he was leaning on the bar talking to the barmaid. Being stood at the bar as he was he should have been wearing a face mask, but his rebellious self probably wouldn't tolerate such an imposition, allowing me the opportunity to identify him (with a mask I expect i would have been none the wiser to his identity).

I returned to my table and we got chatting to a guy at the next table that the area of Little Venice was very popular with celebrities and sports people including Roman Abramovich and Jose Mourinho who all owned property in the area. He went on to explain that although this was central London, such well known individuals could lead a relatively peaceful life as the neighbourhood kept itself pretty much to itself. 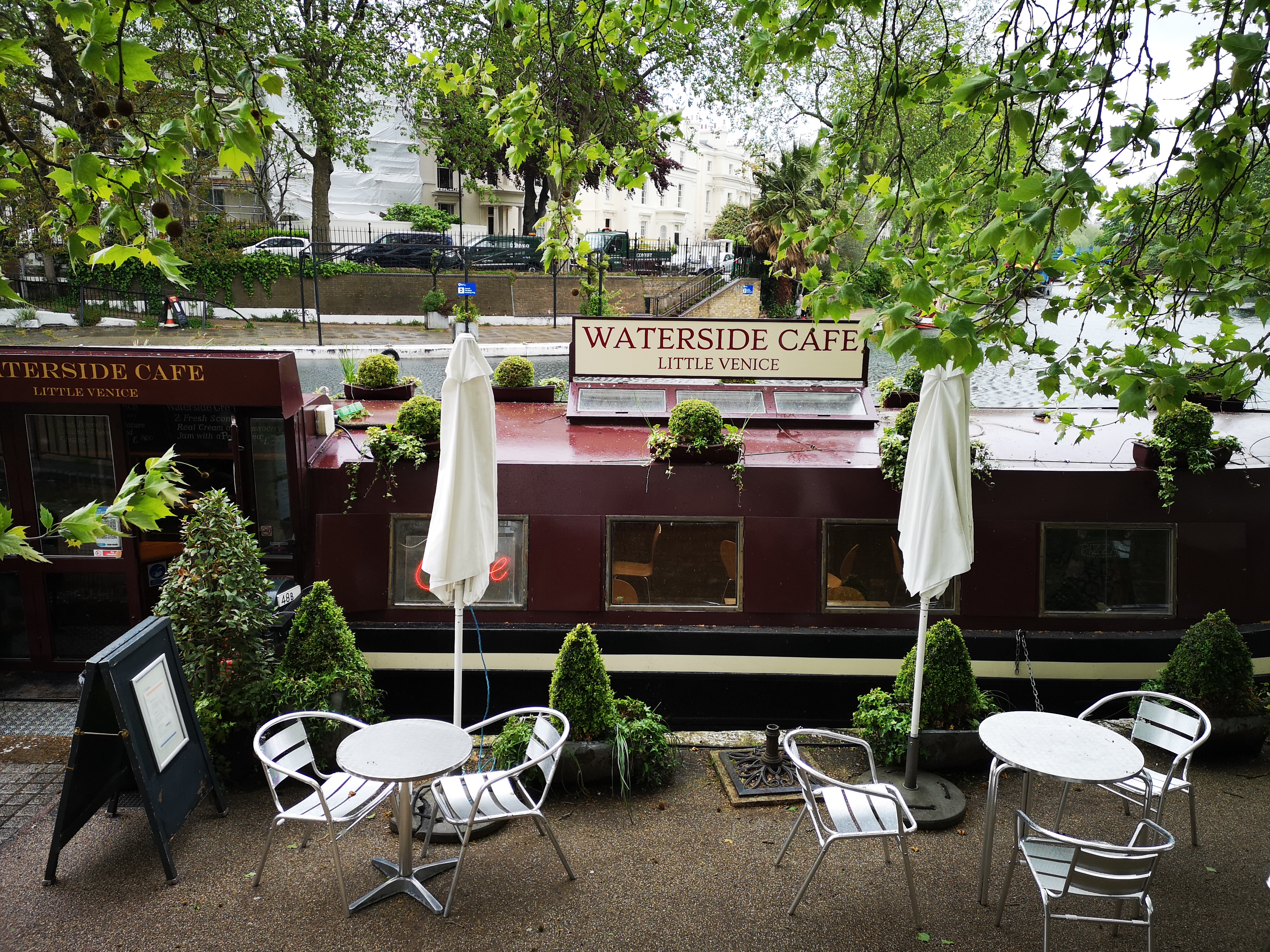 Little Venice, takes it's name due to the beautiful canals and waterways, and is just north of Paddington. You will find a large number of barges and assorted boats in Little Venice as this where the Grand Union and Regent’s canals join, and the area is home to some fancy waterside cafes, cosy pubs and fashionable restaurants.

So why did we find ourselves in Little Venice? It was a deliberate act, arriving by train from York at London's Kings Cross railway station shorlty after the post-pandemic travel ban had been lifted (again), I wanted to do something different on this visit to London, and to avoid overcrowded places. I had known that London's canals were very much under-explored, and the they offer us a different view of London and it's industrial heritage; London's canals pre-date the railways and were central to moving goods around the capital and beyond. The UK's canals are looked after by The Canal & River Trust so we headed off along the route of the Regent's Canal. 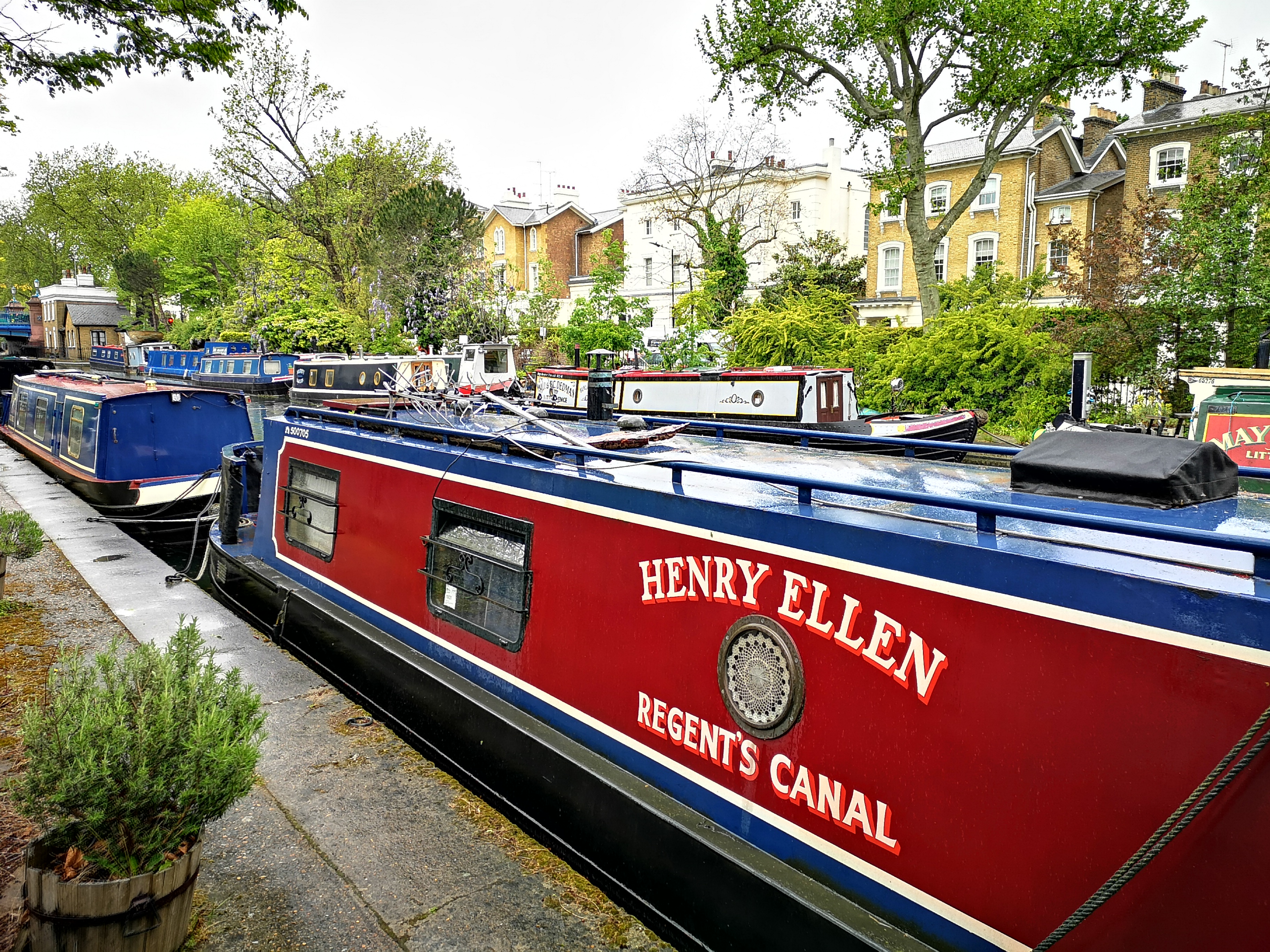 After leaving our quiet but well-managed train we emerged into a remarkably crowdfree Kings Cross Plaza - an uncommon experience on a Friday. We set off, appropriately down York Way, and then cut across to the point where we joined the canal. One of the first narrowboats we encountered was "Word On The Water", which has titled itself the London Bookbarge. This floating bookshop is filled with new and used books and is a real curiosity on the canal. They also have a website where you can buy a much wider range of books than they could possibly store on a barge - why not support them next time you are buying a book rather than the big online book retailers? Their website is https://www.wordonthewater.co.uk/ 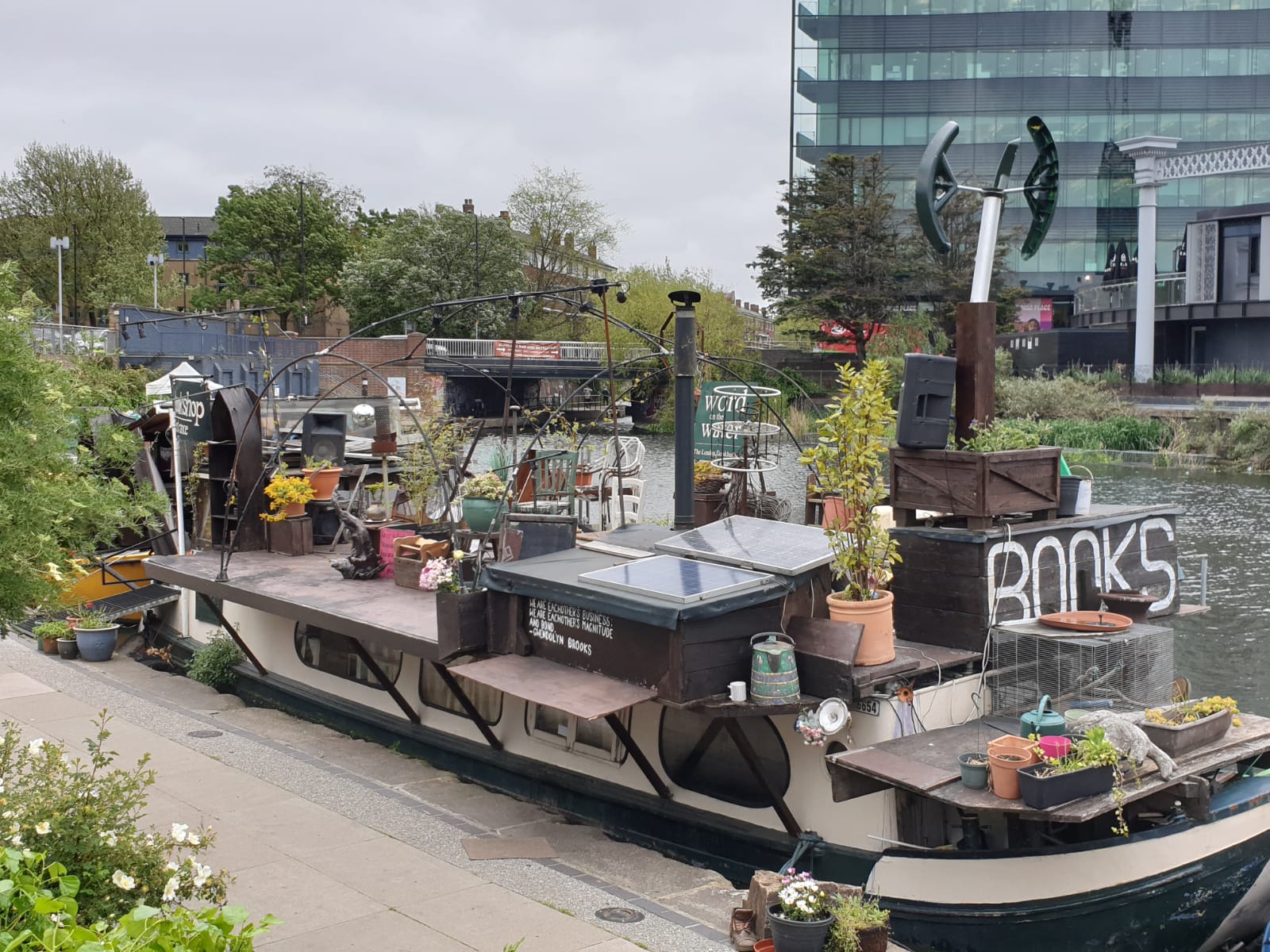 As you move further into the area around Kings Cross and St Pancras you can see how the area, which was very unwelcoming not many years ago, has now become a model of sympathetic and intelligent redevelopment, providing great spaces for visitors whilst retaining the history and soul of it's industrial past. At the heart of this redevelopment of King's Cross is Coal Drops Yard which has become an upscale shopping complex as well as a foodie destination. 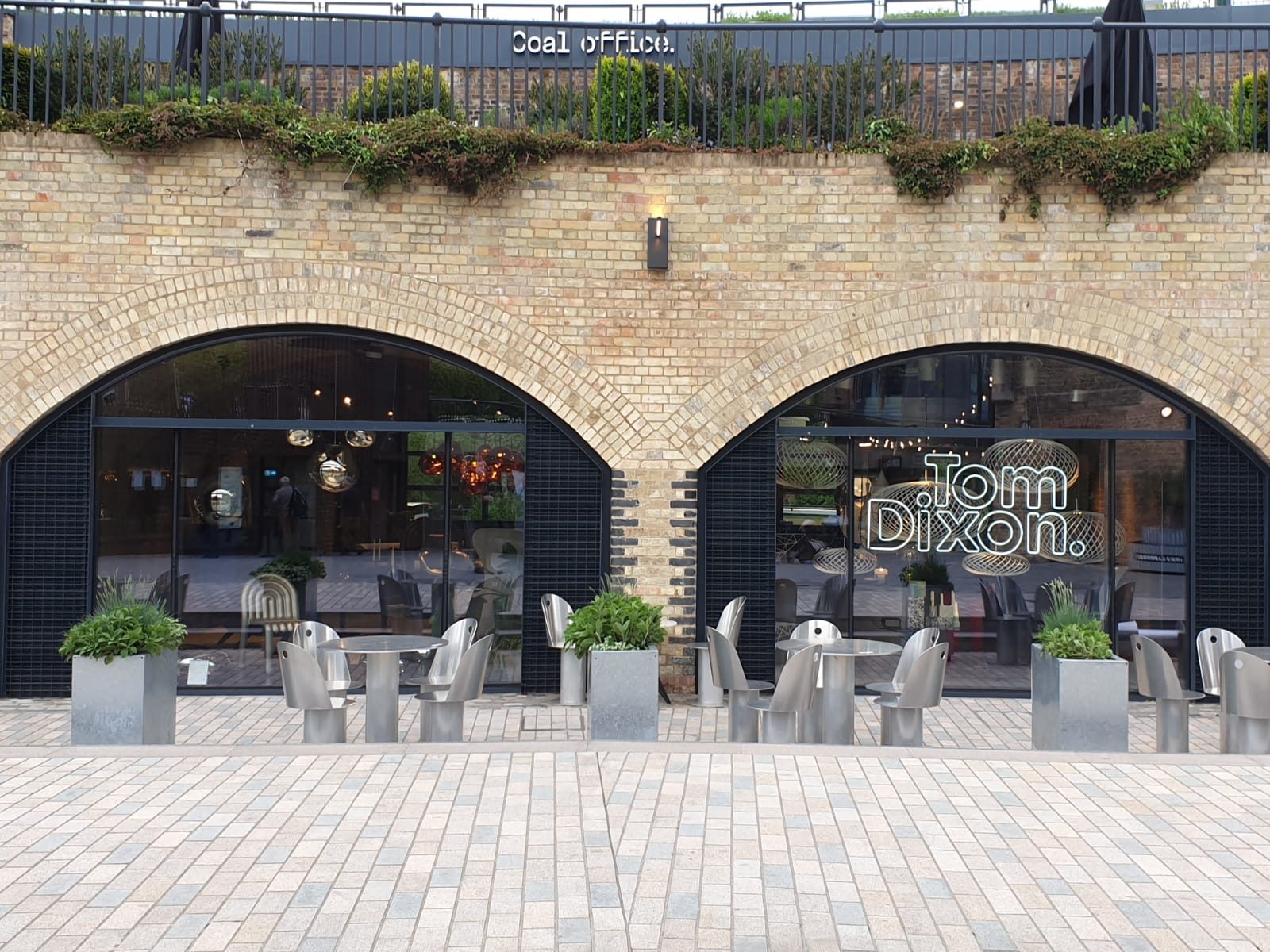 Coal Drops Yard was two large sheds which received coal from the South Yorkshire coal fields which was then loaded onto barges which transported the coal around London in the days when coal was the only source of power. Today Coal Drops Yard has an entirely different role and its cobbled streets and brick arches host an excelectic mix of independent shops offering a refreshing range of choices from the mainstream High Streets.

The choice of eating places has a similar independent feel, and we have previously eaten at The German Gynasium (don't scorn, the food is delicious) and the wonderfully colonial Indian restaurant Dishoom; both are highly recommended.

Leaving Coal Drops Yard we head on to St Pancras basin which is a mixture of old and new and includes a lock-keeper's cottage, but the most striking thing we found was the re-use of industrial gas holders. 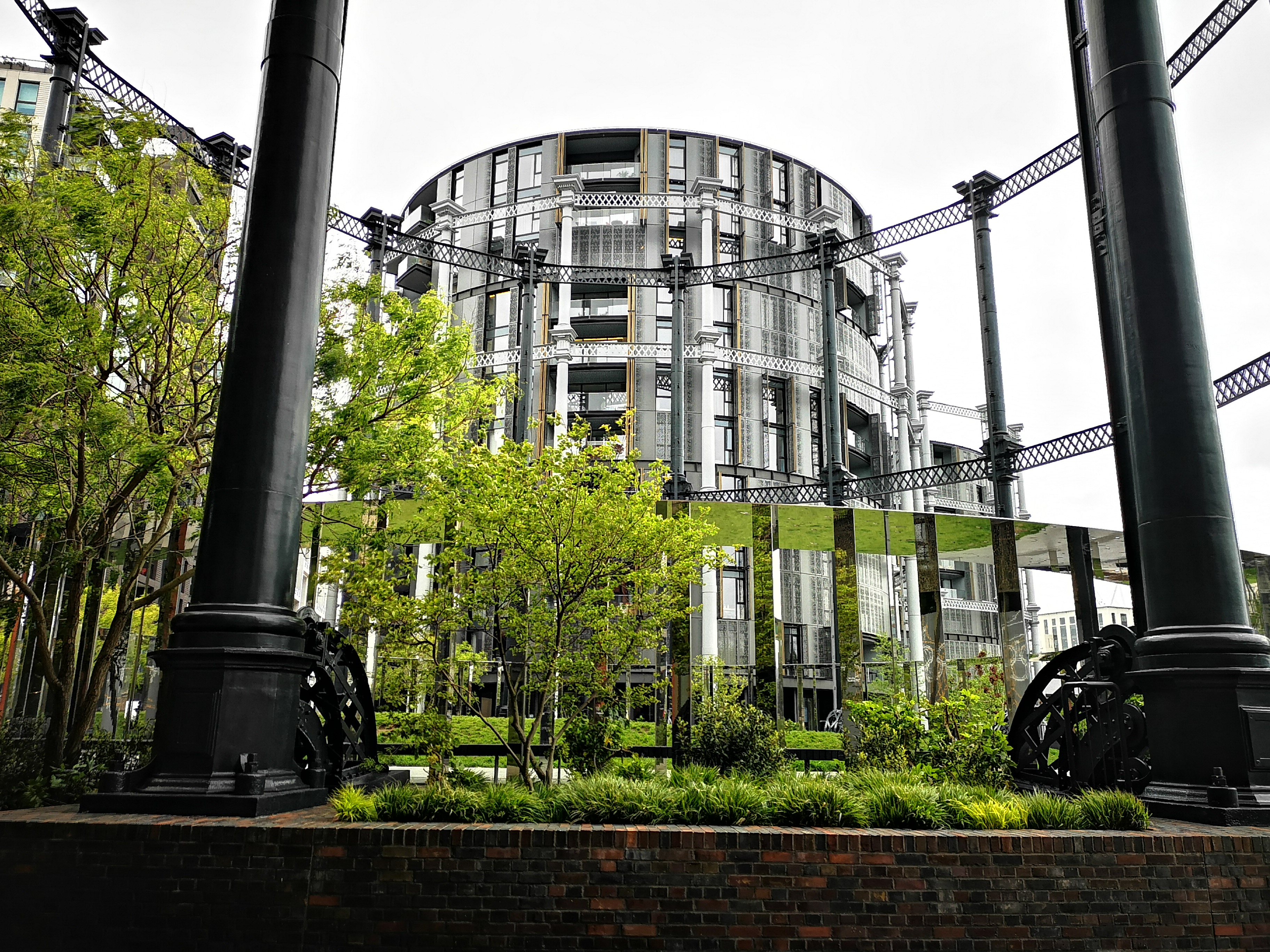 This is really special. Many people will have memories of gas holders in most cities, but the Pancras Gasworks was the largest in Britain when built in the 1860's. Today the frames of the structures remain but the area has been landscaped into park areas and is popular with families offering a great space to relax. 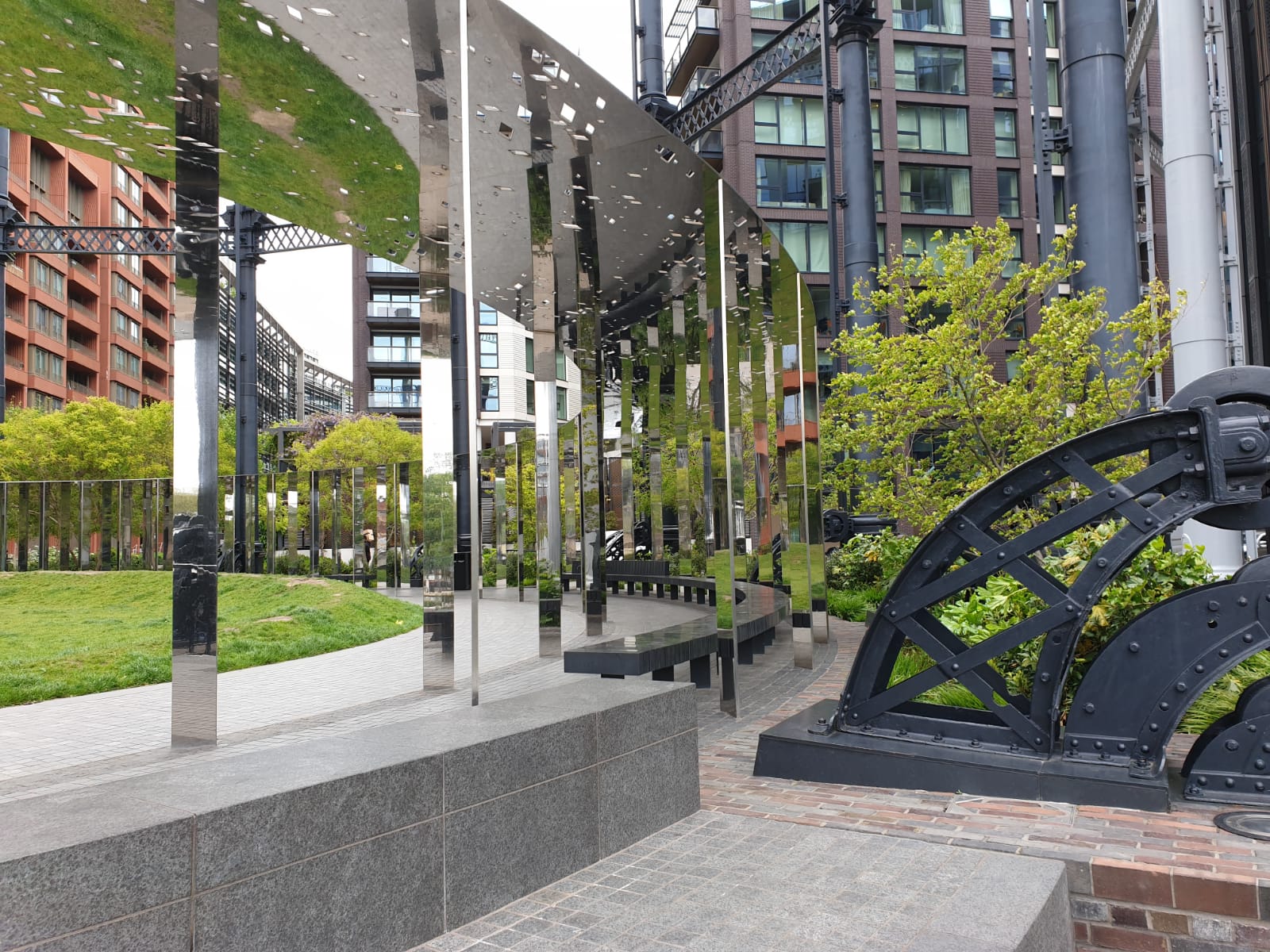 However, the piece de resistance has to be Gasholders - 145 canalside apartments built within the cast-iron structrual frames of three former gasholders. The video below by Louis-Nicholas Darbon, a French artist who owns one of the apartments sums it all up.

Leaving the Kings Cross St. Pancras stretch of the Regent's Canal we followed the towpath inthe direction of Camden. As you saunter along the edge of the canal keep a look out for series' of steps which seem to lead down into the canal, but the reality is that they are a way out of the canal for horses! And the clue to this is in the name towpath. In the early days of the British canal system the barges were towed by horses who walked along the path - hence towpath, and one of the hazards was that horses sometimes fell into the canals. It doesn't take much of an imagination to establish that getting a horse out of the canal and back on to the towpath would be a challenge, so this is why you will see these steps (if the water is not too murky) at regular intervals. 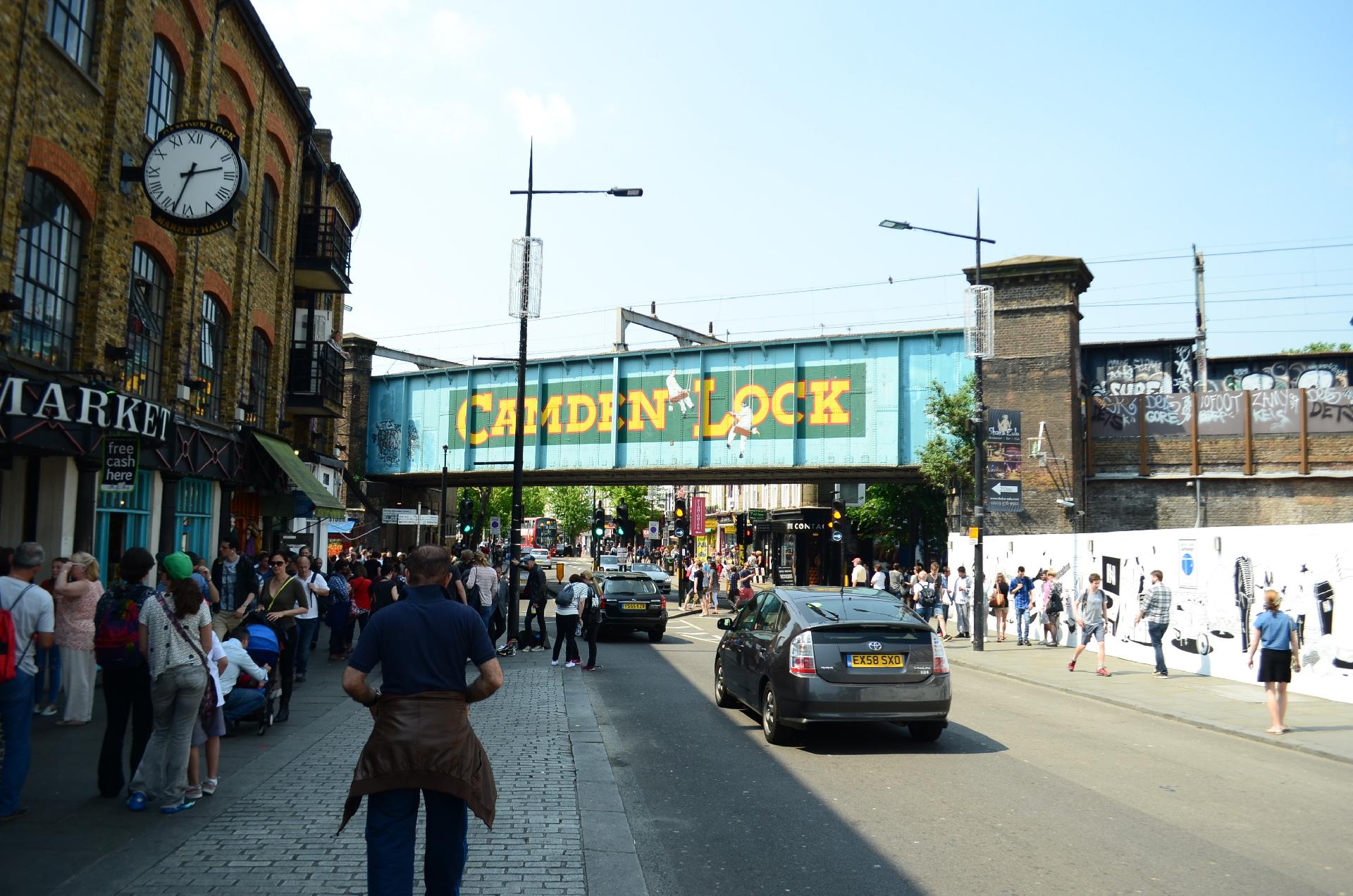 Our next stop of note is Camden Lock which is the home to oe of London's original craft and antique markets. Camden Lock market has becomea a destination in itself and came about from a handful of craft workshops set by the Regent’s Canal, and today it remains a trend-setting collection of artisan stalls including one of the best street food markets in the capital.

Camden Lock has many claims to fame, Amy Winehouse used to work on one of the stalls before she found stardom and even Prince briefly owned a shop on Chalk Farm Road. But interestingly, Camden Lock doesn't actually exist - there are three locks close to Camden but none are Camden Lock. 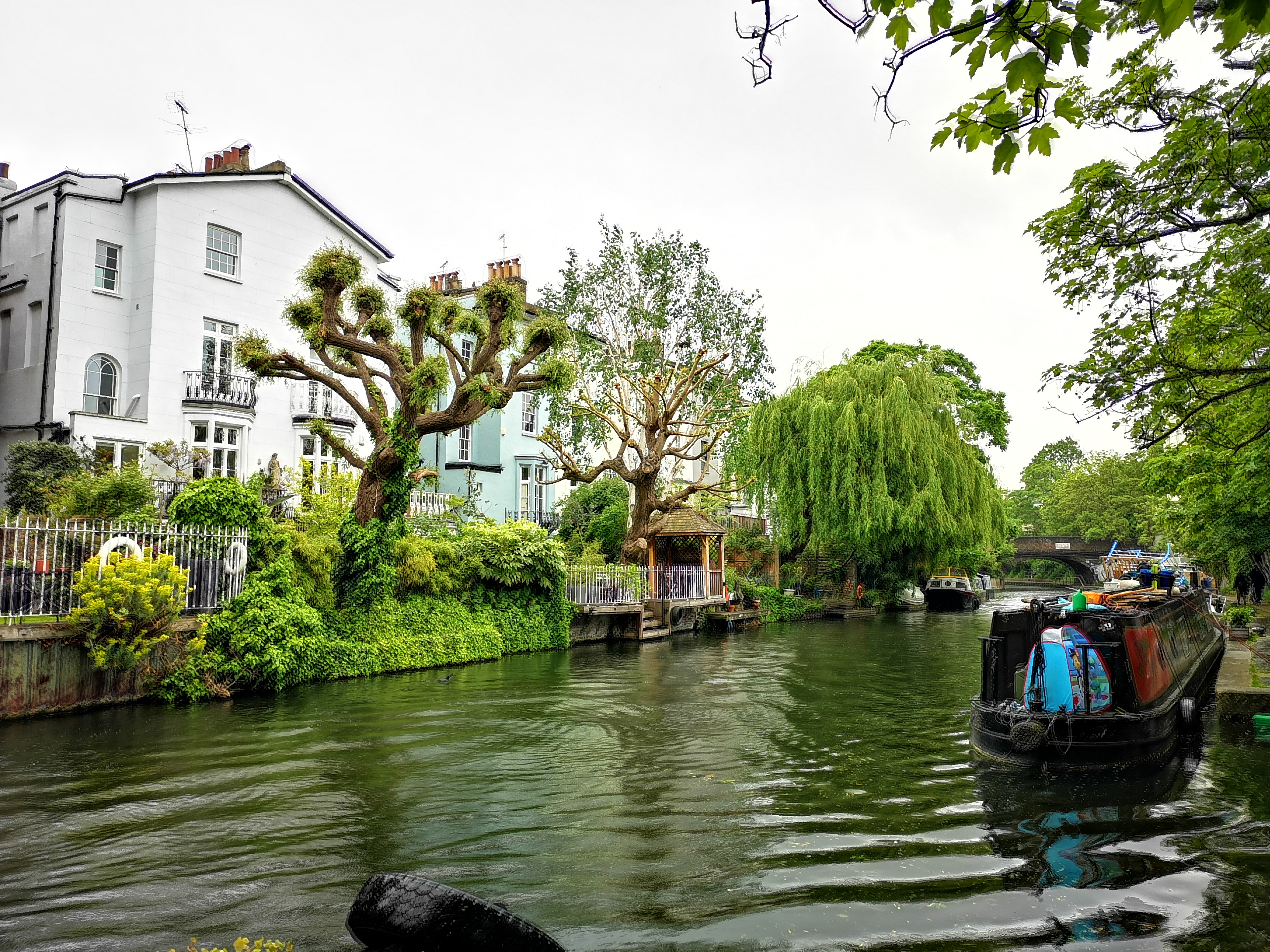 The Regent's Canal continues with Camden Town to one side and Primrose Hill to the other before turning sharply in a westerly direction as it skirts around the north of Regent's Park and the world famous London Zoo and some of London's finest Regency properties can be seen on this stretch of the water (see picture above). The canal passes close to St. Johns Wood and Lord's Cricket Ground and to the north of the London Central Mosque before dropping below ground and into the Maida Hill Tunnel. The emergemce of the Regent's Canal from the tunnel is into a long straight stretch of the canal between Maida Avenue and Blomfield Road, and it is this stretch where you will find the banks of the canal to be lined by a procession of colourful barges and vessels as we finally reach Little Venice.

Little Venice has some fine restaurants and pubs, including the Warwick Castle where I met Noel Gallagher, or didn't meet him.....